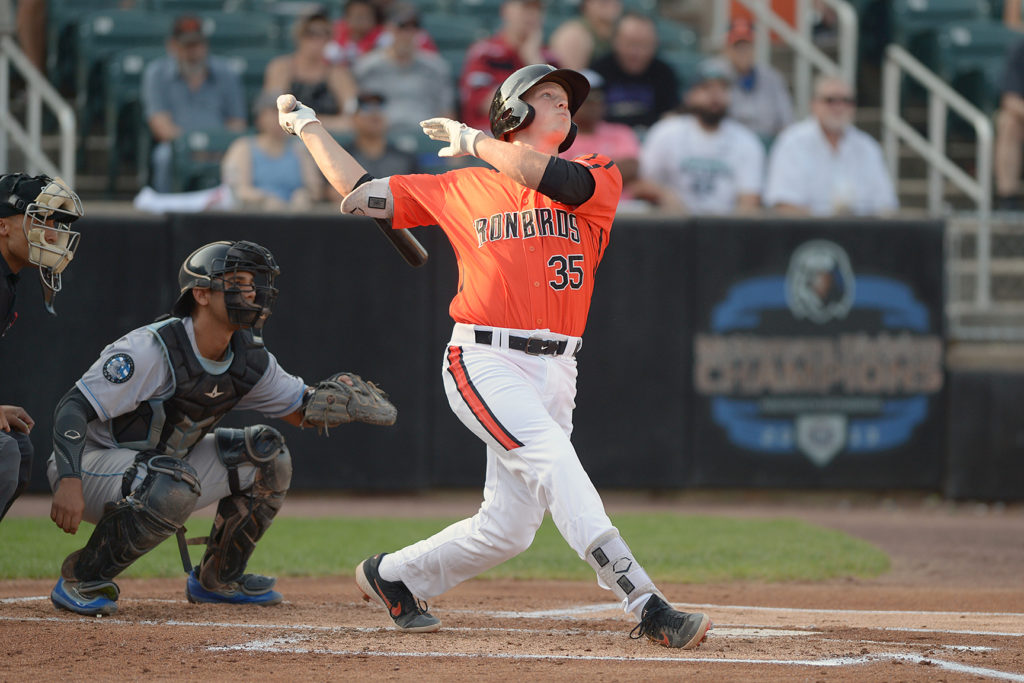 Last years breakout sensation, Vidal Brujan, did not disappoint in 2019. Moving up the ladder, Brujan continued to put bat to ball on a consistent basis and then wreak havoc once on the bases. Brujan has just power to develop in his offensive game, but even without that eventuality, his 70 grade speed and base stealing ability will make him a top of the order force. Brujan swiped 48 bases at an 80% success rate across two levels. His defense at second base is also very well regarded, with soft hands and a strong, accurate arm. This years breakout sensation, Julio Rodriguez, showed off a full 5-tool package along with surprising polish for a teenager. Just 18, Rodriguez blistered both Low-A and High-A with line drives to all parts of the field and home run power from pole to pole. Another season of similar development and production could see Rodriguez in line for a major league promotion before he hits his 20th birthday, joining newly graduated 22 year old Victor Robles in the Argo outfield. Robles acquitted himself quite well in his rookie season, almost reaching 20-20 status. While his offensive game still has some development and refining to go, his defense is already top shelf. A string of Gold Glove awards may be waiting. A pair of shortstops follow the two top guns in the system, both of whom could cement the shortstop position in Mother Lode for the foreseeable future. Jimenez is the more defensively gifted player, but has developed enough offensive game to be more than just a bottom of the order defensive whiz. Chisholm is the more advance offensive player, and while he shows the ability to play short at the top level, he still has some polishing to do on the defensive side. The rest of the top ten for the Argo’s is populated with a number of upside arms. Brusdar Graterol still possesses a 65 grade fastball, and now he can boast a second plus pitch with the continued development of his slider. If his change can progress next season as his slider did this past season, Graterol has the potential to be a rotation leading arm. Eric Pardinho doesn’t have quite the power on his heater as Graterol, but his secondary pitches are more refined and he shows an advanced feel for mixing his pitches, even as an 18 year old. Following those two, Anthony Kay, Brailyn Marquez and Albert Abreu give Mother Lode a second tier of possible rotation arms in the future.

The Roxbury system may not be deep, but what an enviable pair of catching prospects the team has in Joey Bart and Adley Rutschman. Not since Joe Mauer nearly 20 years ago have there been more highly talented and hyped catching prospects in baseball. Both have offensive upsides of middle of the order run producers, with 60 grade power and the bat control to hit for high average as well. Neither are limited defensively either; both could develop into Gold Glove caliber defenders. Bart in particular is quite advanced behind the plate, having called his own game even while in college. Ke’Bryan Hayes showed that his 2018 breakout was not a fluke, rising to AAA and producing very well despite some nagging injuries. His defense at third base is now considered above-average to plus, a testament to his work ethic and commitment to being a well-rounded player. Pushing Hayes at the hot corner is Sheldon Neuse, himself a breakout player of sorts this season. Having seen his prospect status take a hit last season after a rough first year at the AAA level that saw his strikeout rate spike and not coincidently his average and power plummet , Neuse made the necessary adjustments and is once again seen as an everyday candidate in the major leagues. Strikeout rate now back under control, Neuse showed the offensive ability to hit .300 and drive 30 homers. If either of them hit a snag or are moved, Roxbury will still have 2019 second rounder Kody Hoese to fall back on. Himself a well-regarded defensive third baseman with the power to play there, Hoese needs just development time. Outfielders Travis Swaggerty and Daz Cameron have potential, but both need to develop further offensively to avoid being anything more than part time role players in Roxbury. Pitching took a bit of a hit for the Robots in 2019, with just Bryse Wilson showing any distinguishable development. There are some quality arms in the system, but injuries and stagnation have curtailed their progress.

Since graduated second baseman Keston Hiura looks to be a centerpiece type talent for the Dogs for many years. His bat control and developing power peg him as a Jeff Kent type middle infield/middle of the order power bat. Overall, Scurvy is a top heavy system with a fair amount of high risk/high reward types in the lower minors. If and when any of them break through they could join the Luis Robert’s and Adrian Morejon’s of the system in short order. Leading this profusion of lower level talent is a pair of catchers, Yainer Diaz and Diego Cartaya. Diaz is an offensive minded backstop with the bat control and line drive ability to hit .300 annually. His power is still to develop, along with the refining of his defensive game. He is a terrific athlete and has a cannon of an arm, so the tools are there for him to not only remain behind the plate but to thrive there. Cartaya is more well rounded, with a better defensive profile at present but not as high an offensive upside. That’s not to say Cartaya can’t and won’t hit. He has above average tools at the plate and could develop into a very good offensive player once he matures physically and gains experience. Starter Zac Lowther took a big step forward last season, at least in the eyes of the scouting community. The numbers have always been there for Lowther, but because he doesn’t have that one standout offering the scouting community have been slow to embrace him. He does possess a very high quality four pitch mix and he is one of the more disciplined and cerebral pitchers in the minors. Even a jump to AA last season did not slow him down. The jewel of the system of course is outfielder Luis Robert. A power bat with outstanding barrel control portends high average, high slugging numbers once he hits the majors. Robert does not walk much though, so he will be reliant on the average and slugging numbers. Defensively he has the range and ability to play centerfield, but he still needs to learn proper techniques both fielding and throwing. On the bases his speed could be an asset as well, but as in the field, there is work for him to do to learn how and when to use his speed. Still very raw, Robert has the physical talents to one day be a top five player in the major leagues.

While there may not be a lot of depth in the system, the Walla Walla farm does boast a few high quality top end prospects. Leading the way for a second straight season is third baseman Nolan Gorman. Possessor of light tower power and a discerning batting eye, Gorman began to refine his offensive game in 2019. There are still swing and miss tendencies to iron out, but he did cut down on his chase percentages and reach more of his game power. Defense is still an issue, but if he continues to refine his swing then a position will be found as he moves up. Griffin Conine is another power bat with defensive questions. Conine also began to reach his power in game last season and also began to clean up his outfield play. Potential reached, Gorman and Conine could give the Sweets lineup a pair of 40 homer bashers in the middle of the order. Polar opposite of those two is shortstop Xavier Edwards. Contact and speed is Edwards game. Edwards rarely gets fooled and is one of the most difficult hitters in the minors to strike out. His BB-rate dipped last season, but if he can regain his previously high BB%, .300 averages and .400 OBP should be the norm. Edwards needs to refine his base stealing, but his speed already plays very well in the field. A strong arm and reliable hands lead to plus potential at short. Grayson Rodriguez joins Justin Dunn as a pair of power arms capable of mid-rotation ceilings. Both have mid-90’s fastballs and need just to refine their secondary offerings and gain experience. Following the top two arms, the Sweets system has a passel of arms that could join the big league rotation led by Jackson Kowar, Matthew Allan, and Ryan Jensen.

Bums Say ‘Next Year’ Is Now