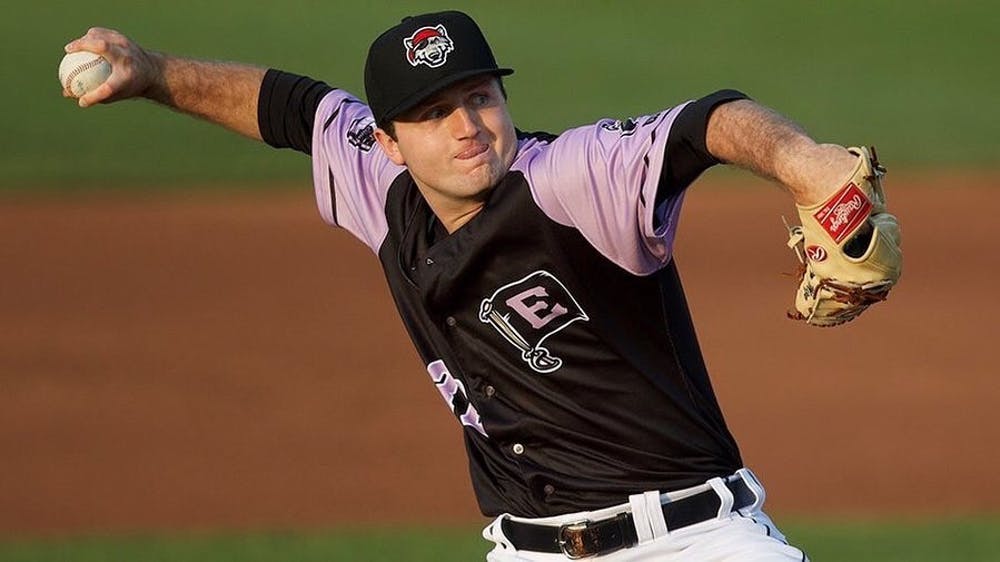 With a third of their minor league roster graduating this season, this will be a system in transition next season. But on the strength of those graduates, the Ann Arbor system looks strong.  Starter Chris Paddack far exceeded the expectations on him, but that should really be of little surprise.  Paddack has outperformed expectations at every level, so the staff leading performance he turned in is something that should be expected at this point.  With impeccable command, a plus fastball, and a plus-plus change that makes even the best hitters look bad, Paddack looks poised to be a perennial All Star performer.  Austin Riley slowed considerably after a red hot start, but the improvements in his game both offensively and defensively were readily evident and the Landlubbers look to have a 3B fixture for the future.  Danny Jansen and Christin Stewart had varying degrees of success upon their promotions, but both showed plenty to warrant extended looks as they continue to mature.  There is talent left on the farm as well, led by breakouts Dylan Carlson and Tyler Freeman.  Drafted out of high school, Carlson took some time to harness his talents, but the wait was definitely worth it.  Tapping into his power, Carlson shows a near complete five tools.  His work ethic is unmatched and that has helped him improve from an average defender in the corner outfield spots, to an above-average centerfielder.  Also a high school draftee, Freeman has produced at every level and his scouting reports have finally begun to catch up with his production.  A contact oriented hitter, Freeman has hit .313 over four levels during his three professional seasons.  Although a low BB rate limits his OBP, Freeman also has a low strikeout rate.  Speed and defense round out his above average skill set.  Pitching took a step back for the landlubbers, but quality arms in Matt Manning, Dane Dunning, Corbin Martin, and Quinn Priester could bounce back in short order.

Hard to imagine how an overall #1 pick can be a fast riser, but that is testament to just how quickly and how far Casey Mize has already come.  Mize boasts four above-average to plus pitches, and with an unparalleled work ethic, he could break into the majors with four legitimate plus or better pitches.  He also has excellent command of all his offerings and really took a big step forward this past season in learning how to sequence his pitches for best efficiency.  There is no question he will post big strikeout numbers, but learning how to get quick outs is a skill many young power pitchers take years to master.  When you look at the basic numbers, a .230 average and a .328/.348/.677 slash line, it would seem Taylor Trammell took a step back last season.  That perception would be largely incorrect though.  Trammell was the victim of more bad luck than good, as seen by his .295 BABIP after posting a cumulative .365 BABIP over his first three seasons.  Trammell still possesses 70 grade speed and very good bat control and patience, so 2019 should prove to be more an exception than the rule for his career.  A premium athlete, Trammell’s speed will play late into his career, which means his line drive approach should lead to many hits that slower runners would not be able to beat out.  Defense should also always be a strength for Trammell.  Nico Hoerner and Brice Turang were new to the system last season with plenty of talent and promise.  Both lived up to the promise and turned in highly productive seasons.  There is no reason not to believe the two of them can man the middle of the diamond in Chicago for years to come.  Coupled with Trammell, the two infielders could populate the top of the Runners lineup with high average, OBP and plenty of stolen bases and runs.  2019 draftee Nick Lodolo will join the rising Tarik Skubal to supplement the starting rotation behind Mize.  Lodolo is a lanky college arm that still has projection in his frame that could see his fastball jump from the low-90’s to the mid-90’s as he benefits from professional coaching and training techniques.  As he is, Lodolo possesses three above-average offerings that all show promise of becoming plus pitches and he could outpace his current mid-rotation tag.  Skubal has developed into the projection he showed last season.  A 9th round pick, Skubal is proving to be a late bloomer.  He has developed three average pitches into three above-average to plus pitches in the course of one season, and there is reason to believe there may still be some further development to his game.  There is more promise in the pipeline right behind this group, led by shortstop Orelvis Martinez and starters Jackson Rutledge and Ethan Hankins that could see the Rum Runner system rise in the rankings next season.

One quick look at the Grants Pass farm will tell you where their strength lies.  A full half of their top ten lies at the shortstop position.  Breakout campaigns from Jeter Downs and Noelvi Marte and the selection of Bryson Stott in the amateur draft further stocked a farm that already boasted Jordan Groshans and Aramis Ademan.  While Marte is fourth on the Brewers depth chart at present, the 18 year old Dominican has the potential to develop into a generational talent.  Athletically gifted and baseball savvy beyond his years, Marte came to the States for the first time this past season and proceeded to hit .309 and slash, .371/.511/.883 in his first taste of full season ball.  He has all five tools and a rare patience at the plate for a young player that could translate into 30-30 seasons.  Downs’ breakout came as he moved up to AA for the first time and his .350/.533/.883 slash line matched Marte’s, but at higher levels.  Downs has almost the athletic ability as Marte, and if 30-30 seasons aren’t in his future, 25-25 seasons certainly are.  Last years #1 draft pick, Jarred Kelenic, came to Grants Pass full of promise, and he did not disappoint.  Starting at Low-A and reaching AA by the end of the season, Kelenic produced a 20-20 season while refining his defense to plus levels.  Joining Kelenic in the GP outfield could very well be slugger George Valera.  Valera has a ways to go and significant development to attend to, but the physical talents are all there.  A year from now, even with Kelenic still moving his way up the ladder, the Brewers #1 could very well be 2019 1st rounder, Andrew Vaughn.  Questioned because of his stature and his right-handedness as a first baseman, Vaughn has done nothing but rake at every level.  He finished his college career as one of the most prolific power hitters of the last 20 years, and he did not slow much in his first taste of professional pitching.  He has an advanced and patient approach at the plate, and squares up any type of pitch thrown to him.  .400/.550/.950 slash lines could be the norm for him once he matures fully.  GP has sat in the bottom half of the minor league rankings through their first couple seasons, but with another year of development like this past season and another adroit draft in 2020 the farm could easily vault its way toward the top of the rankings.

Graduating top prospects Luis Urias and Peter Lambert have some adjustments to make as they move forward, but Nick Solak and Trent Grisham performed so well in their late season tryouts that both have worked their way into Phoenix’s near term future plans.  Following close behind those four in making the major league roster will be the systems #1 prospect and potential two-way player, Brendan McKay.  McKay is major league ready on the mound, mixing in two plus off-speed pitches with his mid-90’s fastball.  His offense is still lacking, but the plan is to continue to allow him to develop in the batters box.  Helping alleviate the graduation of two middle infielders is shortstop Geraldo Perdomo.  His development across both A levels last season gives the Miners a legitimate shortstop prospect to soon pair with Urias and/or Solak.  Perdomo has uncanny patience and plate discipline, leading to outstanding BB%’s and high on-base skills.  If not always by hit, Perdomo can always be counted on to get himself on base.  The hit tool is the question for the young shortstop.  If he can produce enough line drives and leg out enough ground balls to boost his average, then his speed and base running instincts should make him a prototypical lead off hitter.  Spencer Howard jumped onto the scene this year, improving his command and learning how to mix his four pitches and set up hitters.  Howard, overpowering at every level so far, has the potential of four average or better offerings that could lead him to exceed his current mid-rotation ceiling.  Luiz Gohara and Franklin Perez lost their seasons to injury, but both are expected back at full strength at some point next season and they still have mid-rotation or better potential and plenty of time to continue to develop.  The excitement surrounding 2019 1st round selection Hunter Bishop is off the charts.  He showed his excellent patience/power potential, drawing more walks that strikeouts and demonstrating the light tower power he could develop.  There are still swing and miss tendencies he will have to address, but the offensive profile is exciting.  Bishop also has above-average speed allowing him for the time being to play a very good centerfield.  His body type suggests that both his speed and his current centerfield profile could decline as he matures and develops, so he will have to watch his weight in order to stick as a middle of the diamond defender and base running threat.  Joining Bishop in the outfield are holdover’s Yusniel Diaz, Leody Taveras, and Julio Pablo Martinez, all still showing the ability to play everyday in the Miners major league outfield.