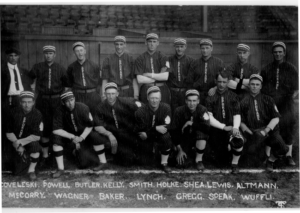 Mutiny Simulation Baseball has roots dating back to 2006.  Then known as “Major Sim League,” 14 baseball fanatics created a simulation league based on the previous years’ stats for major league players, using the Diamond Mind Baseball database.  Two of those team owners are still with us: Matt Buland  and David Johnson.  Within a few years, several well-known owners with names such as Brandon Crews, Jason Palmateer, Kyle Coffin, and Shane Ahn would join the league.

In 2010, mutiny erupted as 10 of the owners rushed the proverbial office of the commissioner and forced him to walk the plank.  A series of unilateral decisions by a single commissioner had challenged a fun and competitive league atmosphere.  The result of this mutiny was a ‘Commissioner’s Office’ consisting of 3 owners that share the numerous responsibilities of managing the league.

Along with a name change, Mutiny Simulation Baseball has pushed forward with the spirit of the league: mutual respect, a democratic mindset, and a pride of team ownership.

Now 13 seasons in, MSB has expanded to 20 teams and continues to offer a fun and strategic simulation of managing a Major League Baseball franchise.